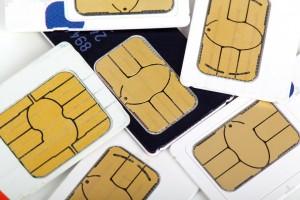 UICC card, called more familiarly a SIM card, contains a set of applications. These applications are managed by a mobile network operator and are installed during card manufacturing.

The main benefits of UICC applets compared to phone apps are their security (phone apps and their data are easy to access and modify) and their independence of mobile device.

In MSS, a user makes signatures using their mobile device. For this, we have developed an applet to securely make the signatures on user’s UICC card.

We work mostly in Java and therefore it is a blessing that the de facto technology for UICC cards is Java Card. Still, you can imagine that Java Card applet development radically differs from our typical field, which is server-side development.

Updating an applet for millions of devices using SMS is not a slice of cake, and sometimes not possible at all. A bug in the applet could make it unusable for all deployed cards, and in the worst case break the whole card.

To make development more difficult the security in MSS must be excellent, the card code must be optimal and complex user interactions are required. A simple mistake could wreck a mobile operator’s business.

The test environment has the required parts of mobile network and UICC card. We have the parts broken down to separate simulated components. This way responsibilities are naturally organized and the structure is clear. 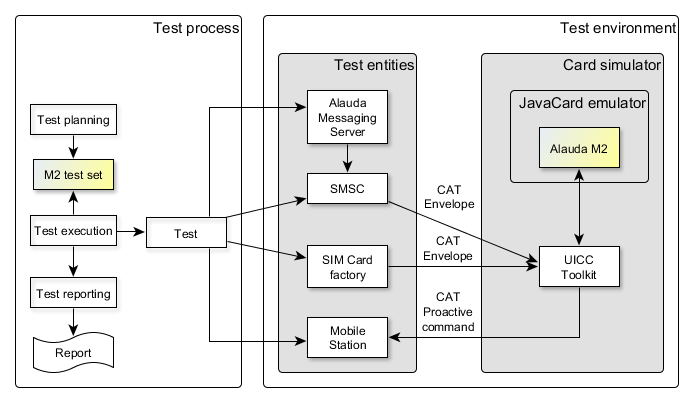 In the above picture, the “Test” orchestrates a single test run. It plays multiple roles, doing everything from registration to testing: 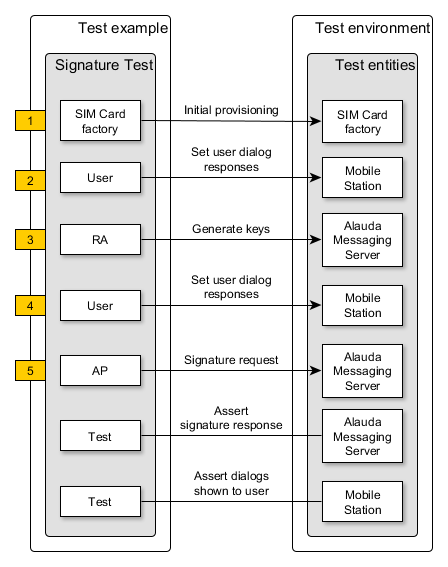 In parts 2 and 4 the test populate MS with user dialog responses. After this, in parts 3 and 5, the test sends an Alauda request to the applet via SMS. MS provides a populated response when the applet requests for user input.

This is what happens in requests that require user dialogs (2-3 and 4-5):

The environment was built for use in later demo purposes later. The AP messages could come from a demo MSS service, instead of a pre-planned test.

MS could do much more than a simply transferring messages. It could host a web interface where a user can have simulated interactions with the applet. In this case the dialog requests would be displayed in the web interface and the responses would come from the web interface. This would result in very accurate demos.

The fact that the test environment can be taken out of context and used like this proves that the simulated components naturally present a real environment.